Did life exist on Mars? - New evidence from NanoSIMS analysis of organic carbon from the Tissint Martian meteorite

The international research team from China, Germany (Bayreuth), Switzerland and Japan found carbon grains in the Tissint Martian meteorite, which was picked up within 3 months after its fall to the Earth. The carbon grains have two petrographic settings, mainly filling fracture space and a few encapsulated in shock-induced melt veins. The encapsulation in the predated shock melts indicates their Martian origin and excludes terrestrial contaminations. Their Martian origin was confirmed by their large deuterium enrichment (δ2D up to +1183 ‰), which is an isotopic fingerprint of Martian materials. Raman spectroscopy and chemical analysis demonstrated that the carbon (kerogen) is coal-like organic matter. The organic matter shows significant 13C-depletions (δ13C = -12.8 ‰∼-33.1 ‰) relative to Martian atmospheric CO2 (δ13C = -2.5∼+46 ‰) and carbonates (δ13C = +25∼+60 ‰). Significant 13C-depletions can be produced by isotopic fractionation through organic reactions. These petrographic settings and geochemical data are consistent with past biotic activities on Mars, and convincingly refute the origin from volcanic processes. Although a possible delivery of these carbons from carbonaceous chondrites cannot be ruled out, yet it is hard to imagine how to selectively extract trace insoluble organic matter from Martian soil and impregnate it in the interior of Martian rocks. In conclusion, the organic matter in Tissint is consistent with a biogenic origin. 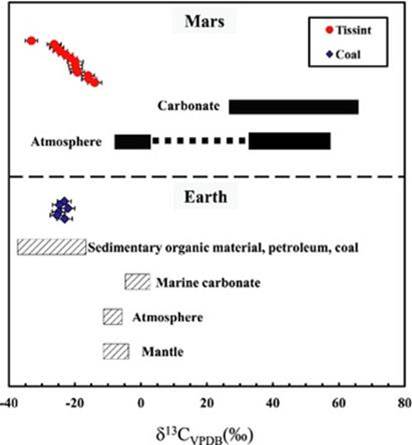