Comparison of laboratory measurements of physical properties of mantle minerals with data from bulk geophysical methods constitutes one of the foundations upon which knowledge of the Earth’s interior is based. Traditionally seismology has provided the best constraints on the internal structure of the Earth; however electromagnetic methods reveal electrical conductivity profiles, which are more sensitive to temperature and composition variations. Iron is the most abundant transition metal within the Earth, and changes in its spin state (i.e., changes in the pairing of electrons in atomic orbitals) can cause changes in electrical conductivity. In this study we applied a new method of spectroscopy that enables data to be collected under extreme conditions to reveal the individual contributions to the spin state of iron-bearing minerals. Our study focused on (Mg,Fe)(Si,Al)O3 perovskite, the Earth’s most abundant phase, and we showed that no spin transition occurs in ferric iron at lower mantle conditions, contrary to previous claims. Instead, ferrous iron likely undergoes a partial spin transition, which could explain the large difference in electrical conductivity between ferric iron-rich and ferrous iron-rich samples. Combined with results from our other studies that measure the effect of iron on the elastic wave velocities of (Mg,Fe)(Si,Al)O3 perovskite, our new data can provide improved constraints for joint inversion of electromagnetic and seismic data, potentially yielding a new probe of heterogeneity in the lower mantle. 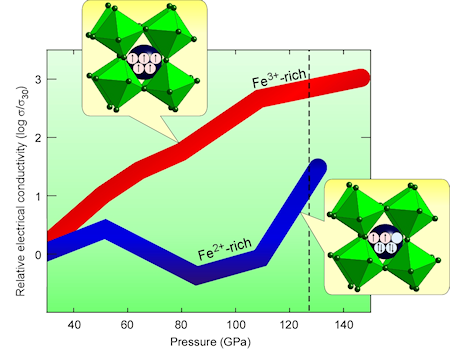 Influence of pressure on the high-temperature electrical conductivity of (Mg,Fe)(Si,Al)O3 perovskite [red: our data, blue: Ohta et al. 2010]. The large difference in conductivity may be caused by the greater degree of electron spin pairing in the Fe2+-rich perovskite.