The present upper mantle is much more oxidized than it was during the formation of the Earth's core, as at that time the silicate melt was in equilibrium with metallic iron. How and when the upper mantle became oxidized has been a topic of debate for decades. Recent experiments at Bayerisches Geoinstitut provide a viable mechanism for rapid oxidation of the upper mantle shortly after core–mantle differentiation. By studying synthetic fluid inclusions trapped at 700-1200°C and 15-26 kbar in olivine and quartz it was found that water and hydrogen are immiscible in the upper mantle. Due to the low density and low viscosity of the H2-rich phase, this fluid was able to ascend rapidly to the Earth's surface, leaving an oxidized mantle behind.

This model has important implications for the origin of life. The classical Miller-Urey experiments work only in a very reducing atmosphere with large amounts of H2. However, because H2 escapes relatively quickly to space these experiments were severely questioned in recent times. The experiments at BGI imply that vast amounts of H2 could have degassed into the early atmosphere, thus maintaining the reduced environment that is necessary for the formation of amino acids via the Miller-Urey process.

Local accumulation of H2-rich fluids in the mantle may further explain the formation of ultra-reducing mantle domains manifested by mantle xenoliths containing unusual minerals such as moissanite (SiC) and even metallic silicon. 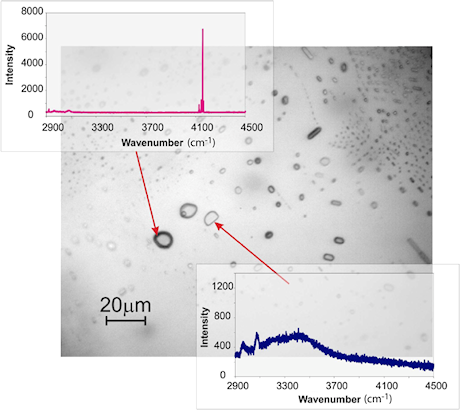