Understanding the structure, formation, and evolution of giant planets and extrasolar terrestrial planets (super-Earths) discovered to date requires knowledge of the properties of basic constituents such as iron, magnesium oxide, and silica at the relevant extreme conditions. Melting is arguably the most important process determining the physical and chemical evolution of planetary interiors, as differentiation of a terrestrial planet into a dense metallic core surrounded by rocky mantle and atmosphere proceeds by gravitational separation of a liquid phase.

Using laser-driven shock compression and ultrafast diagnostics the melting temperature of silica have been measured at 5 million atmospheres, a pressure comparable to the core-mantle boundary conditions for a super-Earth planet (5 Earth masses), Uranus and Neptune. Those advances were made possible by a breakthrough in high-pressure crystal growth techniques at Bavarian Geoinstitute which allowed synthesize millimeter-sized transparent polycrystals and single crystals of stishovite, a high-density form of silica (SiO2) usually found only in minute amounts near meteor-impact craters.

In combination with prior melting measurements on other oxides and on iron, the new data indicate that mantle silicates and core metal have comparable melting temperatures above 300-500 GPa, suggesting that large rocky planets may commonly have long-lived oceans of magma – molten rock – at depth. Planetary magnetic fields can be formed in this liquid-rock layer. 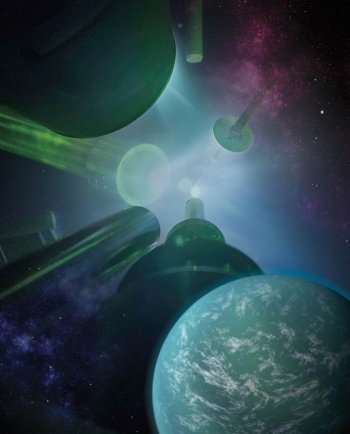