Experimental petrologists at BGI have found a high pressure hydrous aluminosilicate mineral which is stable at the pressures and temperatures of the uppermost lower mantle. They synthesised aluminous Phase D in multianvil experiments at 26 GPa and temperatures exceeding 2000C. They also showed that Phase D has a much higher thermal stability in subducted oceanic crust than relatively Al-poor mantle rocks, because of the stabilising effect of alumina on the crystal structure.

Results from previous experiments indicate that in the lower mantle, water contents in ultramafic rocks are negligible. Paradoxically, mantle plumes believed to be rooted in the lower mantle often have remarkably high water contents. The unprecedented stability of Al-rich Phase D led the scientists at BGI to suggest that water in the lower mantle preferentially resides in rocks of mafic composition. As subducted lithosphere heats up in the uppermost lower mantle, hydrated ultramafic rocks liberate their water in the form of hydrous melts. Phase D is then crystallised when these melts react with subducted crustal rocks.

This hypothesis also provides a natural explanation for some of the geochemical characteristics of mantle plumes. One ubiquitous component (FOZO) has characteristics which suggest it could contain recycled material and is associated with high water contents. It has traditionally been difficult to reconcile these characteristics with subducting crust, which many researchers have argued should be completely dehydrated long before reaching the lower mantle. The current study argues that even if subducted crust is dehydrated in the upper mantle, it can be rehydrated in the lower mantle, and act as a major lower mantle water reservoir over geological timescales. 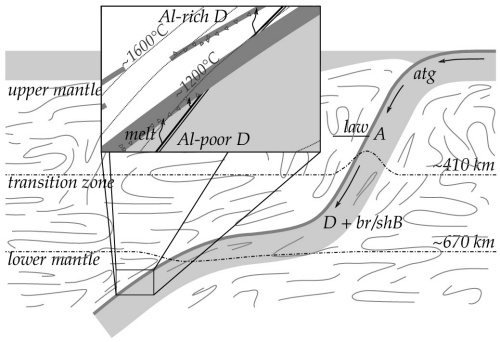