The atmosphere of Earth is depleted in xenon by factor 15 relative to argon and krypton if compared to a "chondritic" noble gas pattern. The nature of this depletion was debated since decades. New experiments at Bayerisches Geoinstitut show that the Ar, Kr and Xe abundances in the modern atmosphere are roughly proportional to their solubilities in MgSiO3 perovskite, the most abundant phase of Earth’s lower mantle. Crystallization of MgSiO3 perovskite from the early magma ocean concentrated argon and krypton in the lower mantle, whereas most of the xenon was lost together with the primordial atmosphere very early in Earth’s history. Accordingly, the noble gases of the modern atmosphere are a mixture of a small residue of a mass-fractionated primary atmosphere and a Ar- and Kr- rich component supplied by degassing of the lower mantle. Most of the Ar and Kr present today originated from the lower mantle and has nearly primordial isotopic composition, while xenon contains a large mas-fractionated component that is responsible for observed enrichment in heavier isotopes. 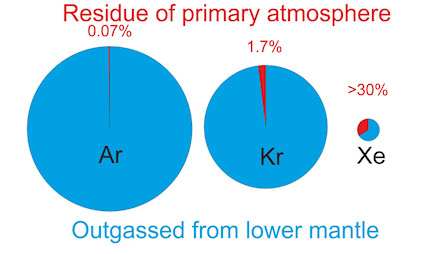