Water has traveled through the Earth's surface and interior, affecting the evolution of our planet. Basalts found in oceanic island volcanoes, which may be sourced from the lower mantle, contain more water than midocean-ridge basalts. This suggests that the lower mantle is a potential major water reservoir. However, previous high pressure experiments have shown that the main lower-mantle minerals in peridotite, which constitutes the lower part of the subducting plate, may dissolve little water. Thus, it is likely that water subducted into the lower mantle is stored in minerals of the basaltic crust, which forms the upper layer of the plate.

Our new publication reports phase relations in hydrous aluminous silica systems, which are abundant components in basaltic crusts, at uppermost lower-mantle conditions by high pressure-high temperature experiments. We found that the alumina content in silica increases with temperature. Above the average temperature of the mantle, rutile-type aluminous silica (stishovite) transforms to a CaCl2-type phase. CaCl2-type aluminous silica may contain more than 1 wt.% of water even at upwelling plume temperatures. This maximum water content is by more than 10 times higher than that of other lower-mantle minerals. Water released from other minerals upon deep subduction may be re-captured by aluminous silica in the basaltic layer of the plate, transporting water into the deeper mantle. CaCl2-type hydrous aluminous silica can also transport water from the deep lower mantle to the upper mantle in an upwelling plume, suggesting that it is the most promising water carrier in the lower mantle. 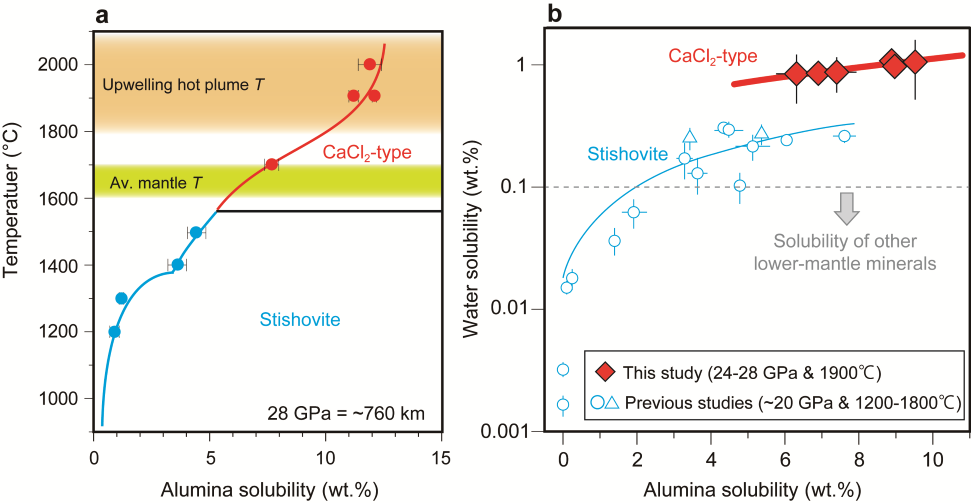